SSG experiences progress in both Denmark and Norway

Skadesservicegruppen (SSG) has come out of the past financial year in a strengthened position, with improved earnings and a consolidated market position.

February 4, 2016. SSG shows solid earnings i Denmark, while results in Norway have improved after a costly establishment. Progress has continued since the end of the financial year, and a positive net profit is expected in 2015/2016.

“We are focusing on what we do best, damage control and similar services. SSG has the most capable employees, who manage to make decisions on the spot and get things done, before further damage to the property. We are the ones whom insurance companies and homeowners should call in the event of severe damage”, said SSG CEO and co-owner Sonny Hoffmann Nielsen.

In Norway, a series of efficiency-enhancing measures have been implemented. The turnover of the subsidiary SSG Norge was 236 million. (DKK 201 million), and had an operating result before depreciation and amortization of NOK -14.6 million (DKK -11.4 million), equivalent to a gain of NOK 18.4 million. There are 201 employees in Norway.

“We have gained a foothold in Norway after some difficult years. We expect a profit in Norway in the current fiscal year, and are convinced that it will be a good business for SSG Group”, said Nielsen.

The turnover of the subsidiary SSG A/S was DKK 356 million in 2014/15. SSG A/S had a pre-depreciation and amortization result of DKK 31.3 million, representing a gain of DKK 18.4 million. There are 326 employees in Denmark.

SSG A/S has invested in the industrial service business unit by hiring a number of top and middle managers with a view to improving the competence, capacity and sales to a projected growth in the coming years.

In recent years, SSG Group has invested substantially in order to strengthen the company’s strategic position in relation to customers and improve the Group’s cost structure, internal processes, IT systems, etc. in order to be in a strong competitive position going forward.

In May 2015 SSG divested the Thylkær & Partners carpentry firm. That activity was loss-making, and SSG no longer wanted to deal with larger contracting and reconstruction projects.
Since 2012, the BWB Partners investment fund has owned 70 percent of the shares in SSG Partners A/S; the remaining 30 percent are owned by management.

“SSG is in a phase of very positive development. We have managed to increase value creation in collaboration with management and employees, notably by promoting organic growth and implementing operational improvements. SSG now has a strong presence in all of Scandinavia, with exciting years ahead”, said Partner Jesper Wadum Nielsen of BWB Partners.

In March 2015 SSG entered Sweden with the purchase of a 31% stake in Crendo, a real estate management company in southern and central Sweden, with offices in Halmstad, Helsingborg,
Malmö, Gothenburg and Norrköping. Crendo has 220 employees and an annual turnover of around DKK 175 million. The strategy is to market the SSG’s damage control concepts for Crendo’s customers, thereby building a Swedish damage control concept and adding sales for the insurance companies in southern Sweden. SSG has the option to increase its stake in Crendo. Thus, SSG is now present in all of the Scandinavian countries. 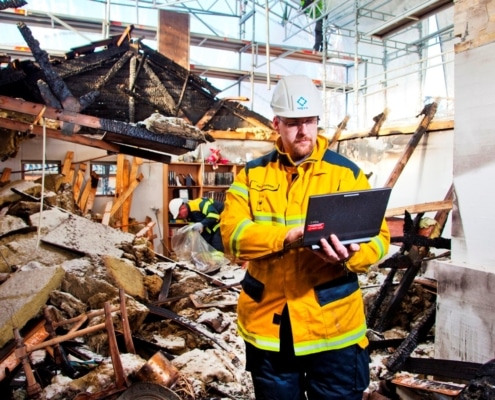